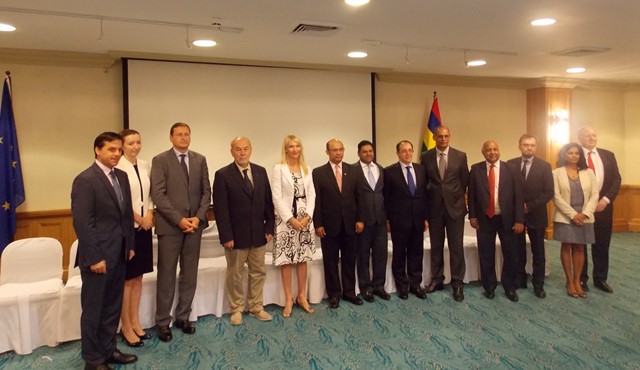 The importance of regional integration and trade for Mauritius economic development was highlighted during the 4th Political Dialogue session between the Republic of Mauritius and the European Union held on 18 January 2016 at Balaclava.

The objective of the meeting was to exchange views on issues of common interest such as the Economic Partnership Agreement (EPA), the Sustainable Development Goals and Regional Economic Integration, amongst others.

The Mauritian delegation comprised a panel of ministers and was led by the Minister of Foreign Affairs, Regional Integration and International Trade, Hon. Étienne Sinatambou. The Ambassador of the European Union, HE Marjaana Sall, leader of the EU party, was accompanied by the representatives of eight other Member States.

They acknowledged that the European Union remained an important external partner for Mauritius. The European Union commended Mauritius for the interim Economic Partnership Agreement (EPA) signed with the European Union in 2009 and confirmed its willingness to continue providing assistance to Mauritius for the implementation of the agreement. They agreed to consider the possibility of the deepening and widening of the interim EPA, leaving the possibility for other ESA countries to join when they are ready. Mauritius reiterated its commitment to conclude a full and comprehensive EPA with the EU.

A synopsis of the 4th EU-Mauritius Political Dialogue can be viewed here.