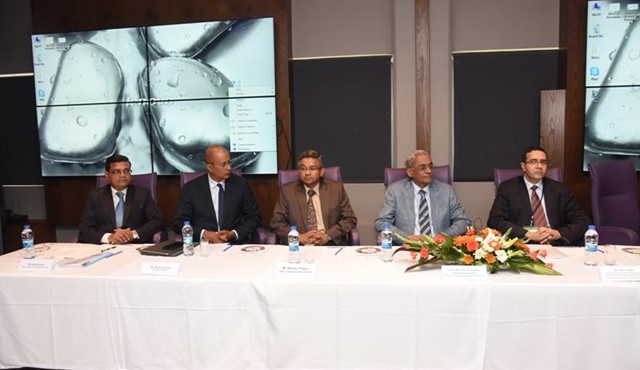 The president of the MCCI, Mr. Azim Currimjee, invites Indian business people to seize the opportunities which exist in various sectors of the economy.

Speaking at the Mauritius-India Business meet, organised jointly by the MCCI, the Confederation of Indian Industry and the Indian High Commission on the 6 February 2017 at Voilà Hotel, Mr. Azim Currimjee said that scopes for the increase in investment in sectors like ICT, pharmaceuticals, seafood and marine industries and energy are high. He also said that stronger collaboration between the business people of both countries will further enhance trade and investment relations and will make Mauritius as the new ‘star and key of the Indian Ocean’.

The Minister of Foreign Affairs, Regional Integration and International Trade, Hon. Vishnu Lutchmeenaraidoo, who officially opened the meeting, stated that investors from India are invited to use Mauritius as a hub to invest in the African continent. He also encouraged the setting up of joint ventures between Mauritian and Indian business people for the implementation of the major projects which are underway in Mauritius, namely in sectors like the blue economy and  infrastructure.

The head of the delegation, Mr. Ajit Gupte, Joint Secretary at the Ministry of External Affairs of India, expressed satisfaction regarding the enthusiasm shown by both parties to collaborate and share experience, particularly regarding the ICT and infrastructure projects.

The CII delegation was on a two-day visit to Mauritius with the objective of meeting their Mauritian counterparts and exploring new business opportunities.