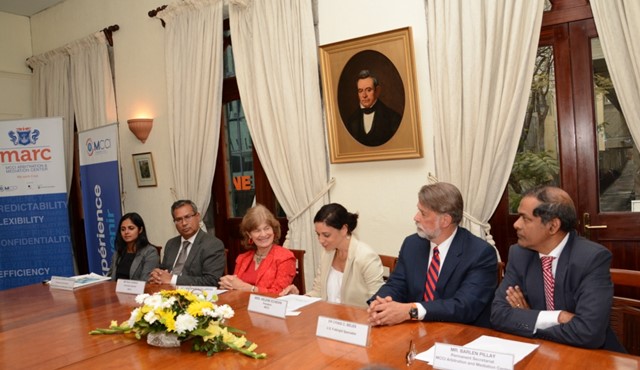 Fulbright workshops on 'Fostering an ADR Culture in Mauritius

The MCCI Arbitration and Mediation Center (MARC), in collaboration with the U.S. Embassy held a Launch Event on 4 August 2015, to mark the official launching of a series of workshops on arbitration and mediation, which are currently being held under the aegis of MARC with the collaboration of ADR expert, Dr Craig Beles. Her Excellency, US Ambassador Shari Villarosa was the guest speaker at the event and expressed her appreciation of the initiative of the MCCI and MARC in leading this project on 'Fostering an Alternative Dispute Resolution Culture' in Mauritius.

In her opening speech, Mrs. Echevin, President of the MCCI, mentioned that it is only through greater awareness and training that the business community and other stakeholders can make optimum use of alternative dispute methods such as arbitration and mediation. She thanked the U.S. Embassy for their support and collaboration through U.S. Fulbright Programme, under which the series of workshops are being held.

She mentioned that 'Operators inevitably have disputes which to our view are fully part of business undertakings. Business is about risks and rewards; however risks may be anticipated and mitigated. The MCCI and MARC firmly believe that ADR is a best practice that may keep operators in control in difficult situations.'

Dr Beles also intervened and stressed the importance of arbitration and mediation as an indispensible part of every counsel’s toolbox. He mentioned a recent EU funded study which concluded that the time wasted by not using mediation (based on a claim of €200,000) is estimated at an average of between 331 and 446 extra days in the EU, with extra legal costs ranging from €12,500 to almost €14,000 per case. He also mentioned that mediation scores settlement rates of 60% to 80%, with benefits such as helping to maintain business relationships, and reducing business interruption.

A presentation of the MARC Arbitration and Mediation Framework was also made during the event by the MARC Permanent Secretariat. The audience met afterwards for a networking cocktail.