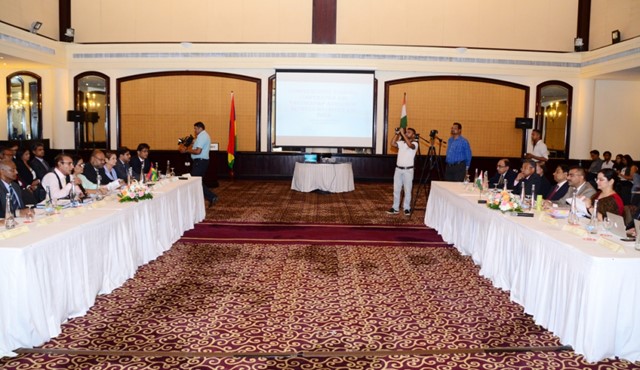 Mauritius-India: CECPA to provide platform to address any barriers in trade

The third round on the resumption of discussions between Mauritius and India on the Comprehensive Economic Cooperation and Partnership Agreement (CECPA) was launched yesterday, 22 January 2018, at Le Méridien Hotel.  The conclusion of the CECPA will move the commercial relations between both countries to a higher level and provide a platform to address any barriers in trade.

In her opening remarks, the Head of the Mauritian delegation, the Secretary for Foreign Affairs (SFA), Ministry of Foreign Affairs, Regional Integration and International Trade, Ambassador Mrs U. C. Dwarka Canabady, said that from Mauritius perspective, CECPA is going to be the most important instrument for the island to work with the developing and the developed world.

For his part, the Head of the Indian delegation, Mr Manoj Dwivedi, Joint Secretary (Africa/Wana) Department of Commerce, highlighted the importance of this meeting because India has witnessed a lot of reforms at a fast pace during the past two years or so, and in the last decade or so, Mauritius has also gone through many reforms and changes.

The three-day discussions, is a follow-up of the 2nd Meeting which was held in India and final discussions on the Joint Study Report.  The work agenda comprises: consultations on Trade in Goods and Services including sub working groups on sanitary-phytosanitary measures; technical barriers to trade and rules of origin as well as the way forward.