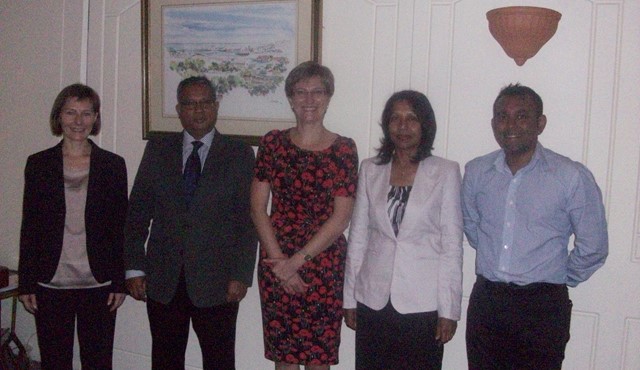 Meeting with HE Mrs Blanka Fajkusova, Ambassador of the Czech Republic

A meeting was held this morning between HE Mrs Blanka Fajkusova, Ambassador of the Czech Republic to Mauritius, with residence in Pretoria, and Mr. Raju Jaddoo, Secretary-General of the MCCI.

Discussions focused on the consolidation of trade relations between the business people of both countries. HE Mrs Blanka Fajkusova expressed satisfaction regarding the forthcoming visit of a high-level delegation, led by the Minister of Foreign Affairs of the Czech Republic, Hon Lubomir Zaoralek. She said that this visit bears testimony of the determination of the country to develop new markets, particularly in Africa.

The Secretary-General was of the view that there are avenues of cooperation between the two countries which can be further developed. He said that Mauritius can be used by the Czech business people as a hub to tap the African market. He felt that the Business Meet which would be organized during the visit of the delegation would give a new boost to the trade relations between Mauritius and the Czech Republic.