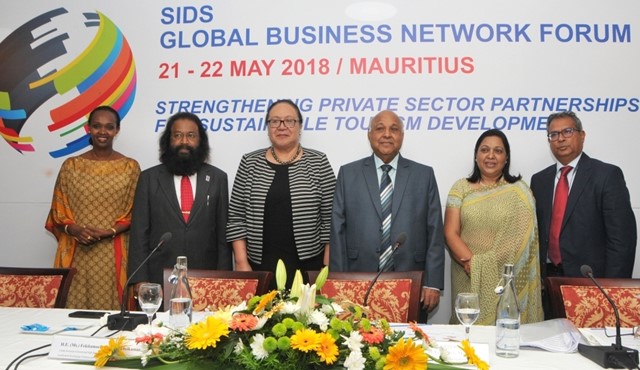 Mauritius hosted the third Global Business Network Private Sector Partnership Forum 2018 of the Small Island Developing States (SIDS-GBN)  on the 21st and 22nd of May 2018. The SIDS-GBN is a network  that aims to forge collaboration among SIDS regional private sector organisations, strengthen inter-regional business alliances, and encourage international businesses to focus on SIDS as potential market opportunities and vice versa.

The event is organised by the United Nations Office of the High Representative for the Least Developed Countries, Landlocked Developing Countries and Small Island Developing States (UN-OHRLLS) and the Government of Mauritius.  The theme of this year’s forum is strengthening private sector partnerships for sustainable tourism development.

The opening address was given by the Minister of Ocean Economy, Marine Resources, Fisheries and Shipping, Mr. Premdut Koonjoo who pointed to the ever-changing tourism eco-system and the common issues faced by SIDS economies. He further highlighted that the success of the tourism sector in Mauritius was mainly due to a strong synergy between Government and the private sector. Minister Koonjoo called for the need to discuss how to uplift SIDS’ value propositions, innovate and transform to rise above competition.

The UN Under-Secretary-General and High Representative for the Least Developed Countries, Landlocked Developing Countries and Small Island Developing, Ms. Fekitamoeloa Katoa Utoikamanu, pointed to the advocacy mandate of the UN-OHRLLS and the role of the latter in sustaining the mobilisation of international support for SIDS and increased dialogue with international financial institutions on SIDS-specific issues and continue to do so.

The Secretary-General of the Mauritius Chamber of Commerce and Industry, Mr Raju Jaddoo, highlighted that SIDS economies are today Large Ocean States, with the vast opportunities of countries’ exclusive economic zones. He pointed that that one in every ten jobs throughout the world is directly or indirectly based on the tourism.

According to the UN Tourism Organisation international tourists’ arrivals will increase from 1.2 billion in 2017 to 1.8 billion by 2030 which means that tourism will remain a key contributor to growth, investment and employment in the decades to come, he said.

1. Creative Mauritius, a joint initiative of the MCCI and SME Mauritius to integrate the handicraft industry in the Mauritian tourism eco-system through a unique electronic portal to showcase genuine locally made handicrafts to tourists through the taxfreeshopping.mu website which is now e-commerce enabled.

2. The  Programme National d’Efficacite Energetique (PNEE) through a public private partnership between the Ministry of Energy and Business Mauritius, to conduct energy audits in specific fields. The project is financed by the AFD

3. The setting up of an E-Waste Management system through a partnership between the MCCI and the Ministry of Environment to operationalize a national system for collection, transportation, recycling and export of e-wastes in Mauritius.

The SIDS-GBN Private Sector Partnership Forum’s  was attended by representatives from 12 SIDS countries as well as international organisations such as the United Nations, FAO, WHO, World Bank, European Union and Commonwealth Climate Finance Access Hub.