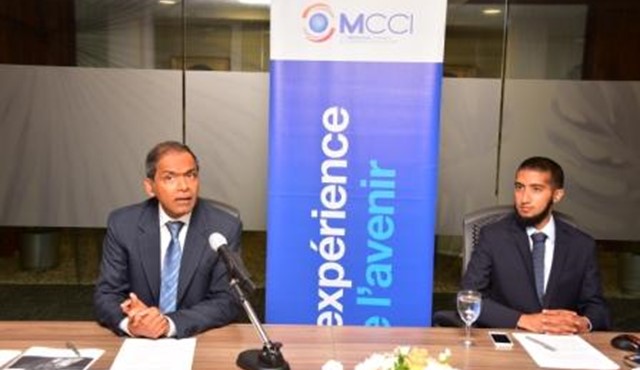 Sustained increase in the Business Confidence Indicator at + 8.2 points

The MCCI released its Business Confidence Indicator for the 2nd quarter of 2018 on Friday 17 August 2018, through a press conference.

The latest quarterly business survey shows that business confidence continued to rise in the second quarter of 2018. The balance of opinions remained firmly in the positive territory at 8.2 balance points, with slight fall from the 8.7 points achieved  in the first quarter of 2018.

The Mauritian economy is intrinsically linked to the global economy. We notice that the economic tendency at the global level is similar as to Mauritius. grew less positively in the second quarter of 2018, after reaching its peak at 26.0 balance points in the first quarter of the year. The indicator has returned close to the level achieved in the fourth quarter of 2017, at +16.5 points

This analysis is confirmed by international institutions.

The IMF confirms in its latest publication that the global economic activity continues to firm up but the expansion is becoming less even and risks to the outlook are mounting.

This institution maintained its growth forecasts this July. It favours a macro-economic scenario where the global growth rate, as measured by GDP, to increase by 3.9 percent in 2018, similar to its April 2018 forecast. Nonetheless, on the back of growing trade tensions and gradually tightening financial conditions, the IMF has decreased its growth predictions for advanced economies by 0.1 percentage points, to reach 2.4 percent growth in 2018.

In Mauritius after a turnaround in the last quarter of 2016, the business confidence indicator has been evolving in the positive area irrespective of the sector of activity or the size of the business.

Domestic demand is one of the key engines of growth in the Mauritian economy, with more than 36 percent of entrepreneurs indicating that an increase in demand has been one of the most significant factors affecting their businesses. The combined effects of purchasing power policies in the recent Budget, and a relatively low interest rate, have had an effect on consumption expenditure.

Moreover, we have also noticed a significant increase in planned investment with more than 30 percent of entrepreneurs indicating that they would increase their investment expenditure in the next twelve months. Investment is predominantly in Plant & Machinery, indicating that entrepreneurs are investing in new production lines and markets. This is confirmed by the fact that approximately 20 percent of entrepreneurs have indicated that their strategies for diversification of products and the tapping into new markets have contributed positively to their business performance during the second quarter of the year.

We notice however that investment in R&D remains relatively low with only 8 percent of entrepreneurs planning for an increase in investment in this field in the next twelve months. This is despite a number of fiscal incentives such as the double deduction on R&D expenditure being implemented in the last two Budgets. The rapid implementation of the new IP legislation shall give operators assurance on the protection of IP Assets, and thus encourage higher levels of investment in R&D related activities.

Based on the business climate results for the quarter of 2018, we estimate that the economic growth in the second quarter of 2018 was of 4.2 percent. Our econometric projections for the full year 2018 is that growth should be of approximately 4 percent, the first time this figure is reached since 2011.

Similar to the situation in the world economy, we are experiencing a prudent optimism of entrepreneurs as regards to the economic environment. With downside risks to the economy over the next quarters of 2018, it is necessary to constantly monitor and provide support mechanisms to secure and boost the current upswing in the economy.

The full report can be accessed here.