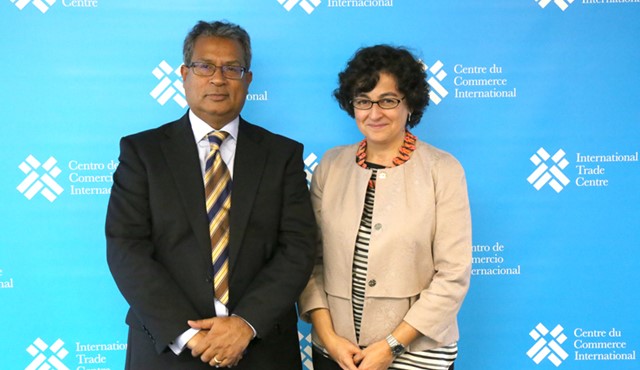 The Secretary-General of the MCCI, Mr. Raju Jaddoo, had a meeting with the Executive Director of the International Trade Centre (ITC), Mrs. Arancha González on 7 October 2015 at the seat of the organization in Geneva.

The objective of the meeting was to review the ITC projects designed for Mauritius, which include the National Export Strategy (NES) and the Trade Obstacle Alert Mechanism (TOAM).

It is to be recalled that the MCCI is the National Focal Point of TOAM, which is a web-based platform developed by the ITC to facilitate the identification and elimination of trade obstacles faced by the business community.

The National Export Strategy, designed by ITC, provides a blueprint for competitiveness and development of the Mauritian export sector and strengthens the links between export development and economic growth. Members of the business community of the public and private sector, including representatives of the MCCI, form part of the core team which is responsible for the implementation of NES.

Future projects to be realised in Mauritius were also discussed. Both parties highlighted the excellent long-lasting relations that exist between the MCCI and ITC, since the mid-1980s, and expressed the wish for an ongoing collaboration.

Legend: Mr. Raju Jaddoo, the Secretary-General of the MCCI, and Mrs. Arancha González, the Executive Director of ITC.