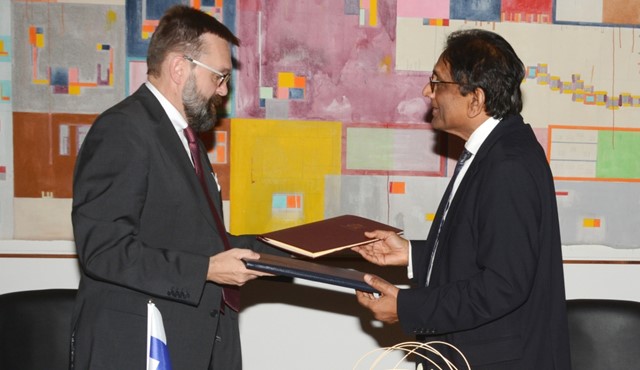 A Bilateral Air Services Agreement signed between Mauritius and Finland

In his speech, the Ambassador of the Republic of Finland to Mauritius, Mr. Petri Salo, said that the agreement will help to further strengthen the existing bilateral relations between Mauritius and Finland by boosting economic activities including trade and tourism, and will contribute significantly to increase people-to-people contact between the two countries.

For his part, the Secretary to Cabinet and Head of Civil Service, Mr. Seebaluck pointed out that the signature of the BASA comes at an opportune time since both governments are developing new air transport strategies to transform the aviation industry into a key driver of economic growth. While the government of Finland is implementing an Air Transport Strategy 2015-2030 to strengthen the Helsinki airport as an international transit hub, the Mauritian government is fully committed to implement a more open and robust air access policy and develop the country as an aviation hub.

The BASA was signed on 17 June 2016 at the Prime Minister’s Office in Port Louis.

Legend from left to right: The Secretary to Cabinet and Head of Civil Service, Mr. Sateeaved Seebaluck, and the Ambassador of the Republic of Finland to Mauritius, Mr. Petri Olavi Salo.