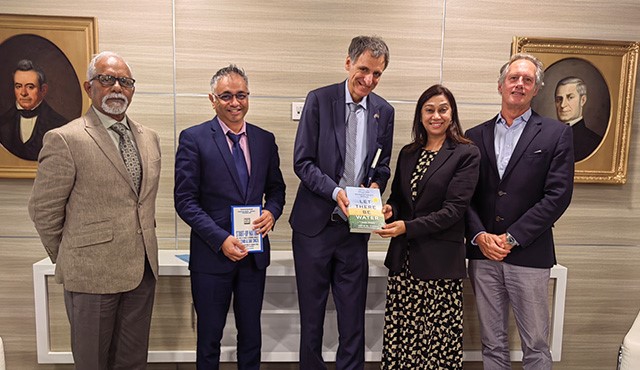 Courtesy visit of His Excellency, Ambassador Eliav Belotsercovsky at the MCCI

Mr Keeshorlal Gungah, Honorary Consul of Israel in Mauritius, Dr Yousouf Ismaël, the Secretary-General, His Excellency Eliav Belotsercovsky, The Ambassador of the State of Israel to Mauritius, Mrs Namita Jagarnath Hardowar, President of the MCCI and Mr Guillaume Hugnin, immediate past president.

The Ambassador of Israel to South Africa, Eswatini, Lesotho, Madagascar and Mauritius, His Excellency Mr. Eliav Belotsercovsky, paid a courtesy call to the Mauritius Chamber of Commerce & Industry (MCCI) yesterday, Wednesday the 6th of July 2022. He was received by the President of the MCCI, Mrs Namita Jagarnath Hardowar and Secretary-General, Dr Yousouf Ismaël. The Honorary Consul of the State of Israel in Mauritius, Mr. Keeshorlal Gungah and the immediate past President of the MCCI, Mr Guillaume Hugnin, were also part of the meeting.

Discussions included the possibility of the signature of a Memorandum of Understanding between the MCCI and the Federation of Israeli Chambers of Commerce. Furthermore, trade opportunities between the two countries and cooperation avenues were also mentioned.