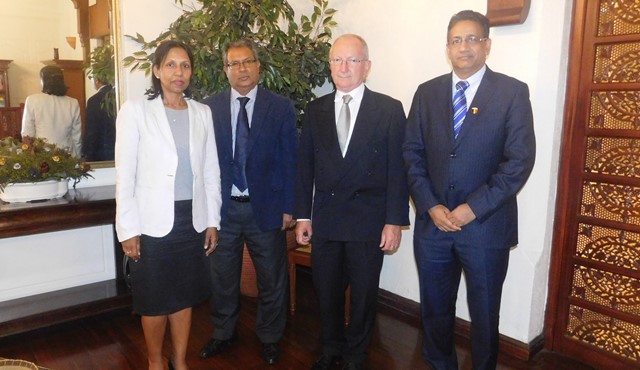 Courtesy visit of Paul Cartier, Ambassador of the Kingdom of Belgium, to the MCCI

The ambassador of the Kingdom of Belgium to Mauritius with residence in Tanzania, His Excellency Paul Cartier, paid a courtesy call on the Secretary-General of the MCCI, Mr. Raju Jaddoo, on 26 July 2016.

In the course of discussions, HE Paul Cartier expressed the wish that there is a further collaboration between people of both business communities while at the same reinforcing cooperation in the economic and social development.

He also mentioned that a collaboration between the Federation of Enterprises in Belgium (FEB), a multisectorial private sector organisation, and the MCCI will be highly beneficial for both countries, especially in the enhancement of an optimum entrepreneurial atmosphere.