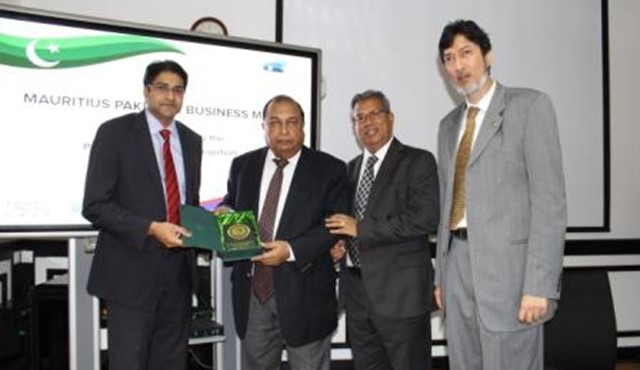 Successful business meetings were held during the Mauritius-Pakistan Business Meet organized jointly by the MCCI and the Board of Investment (BOI) on 21 October 2016. The event saw the participation of about 15 Pakistani business operators, led by Mr. S.M. Muneer, Chief Executive of Trade Development Authority of Pakistan (TDAP), who formed part of the official Pakistani delegation to Mauritius from 20 to 25 October 2016.

The Managing Director of the BOI, Mr. Ken Poonoosamy, loaded the determination of Pakistani business people to explore new ventures in Mauritius and recalled that representatives from both BOI and MCCI formed part of the official Mauritian delegation, led by HE Dr. Ameenah Gurib-Fakim to Pakistan in April 2016.

On his part, Mr. Raju Jaddoo, Secretary General of the MCCI, stated that the benefits that are available to business operators, mainly after the signature of the PTA between Mauritius and Pakistan in July 2007, have to be further exploited. He also reminded members of the business community present of the Joint Business Council that the MCCI signed with FPCCI, which is one of the ideal platforms that the private sector companies can capitalize on.

His views were shared by Mr. S.M. Muneer who expressed the wish for further collaboration between the two countries.

Pakistani delegates had the opportunity to showcase their products and develop new collaborations during the one-to-one meetings organized with Mauritian business people.