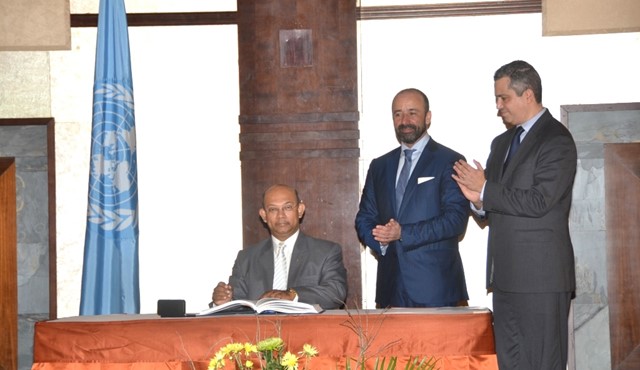 The signature ceremony for the Convention, known as the 'Mauritius Convention on Transparency', was held on 17 March 2015 at the InterContinental Hotel at Balaclava. The signature ceremony took place in the context of a conference addressing issues relating to investor-State arbitration and human rights and Arbitration and Access to justice. The Convention is an instrument by which Parties to investment treaties express their consent to apply the Rules on Transparency in Treaty-based Investor-State Arbitration of the United Nations Commission on International Trade Law (UNCITRAL) to their existing investment promotion and protection agreements concluded before 1 April 2014.

The signing and ratifying of this Convention translates the determination of Government to introduce openness and accountability in the field of investor-State arbitration and promote Mauritius as a regional and international arbitration hub. It also demonstrates Government's commitment to uphold democratic participation, good governance and the rule of law in the region.

Speaking at the opening of the conference, the Minister of Foreign Affairs, Regional Integration and International Trade, Mr Etienne Sinatambou, stressed the importance of transparency in Treaty-based investor-State Arbitration, while commending the UNCITRAL’s ongoing work on transparency.The signing in Mauritius of the United Nations Convention on Transparency in Treaty-based Investor-State Arbitration is a matter of pride for any Mauritian, official, as well as the Government, said the Minister.

For his part, the Under-Secretary-General for Legal Affairs and Legal Counsel of the UN, Mr Miguel de Serpa Soares, observed that Mauritius is a country that has truly embraced international arbitration as an effective method of resolving commercial and investment disputes.

As regards the UNCITRAL Rules on Transparency, the Under-Secretary-General observed that these rules represent a fundamental change from the status quo of investment arbitrations often conducted behind closed doors and hidden from the public view, even when the issues being raised gather much attention from the public and the media. ‘All in all, I firmly believe that the conclusion of the Mauritius Convention is a momentous occasion in the field of investment arbitration’, he said.