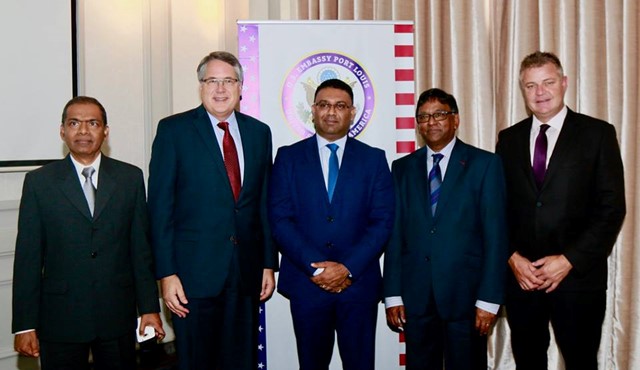 The MCCI is currently working in collaboration with the US Embassy in Mauritius in view of devising a strategy for Mauritius on the “Use of Satellite-based data for Government and Business”. In this context, an expert from Digital Globe, a U.S. company, was in Mauritius from the 4th to the 8th of December 2018.

A workshop, entitled the Mauritius Earth Observation Discovery Day, was organized on the 6th of December 2018 at the Labourdonnais Hotel, bringing together stakeholders from the Government, private sector, as well as academia in order to create awareness on the applications of satellite-based data.

In his opening remarks, the President of the MCCI, Mr. Marday Venkatasamy, highlighted the various possibilities of using satellite-based data, combined with Artificial Intelligence for the economic development of Mauritius; from agriculture, smart cities and urban planning, traffic management to maritime surveillance and exploration.

He further pointed out that an OECD study shows that for each dollar spent in satellite-based data, there is a value addition of nearly 10 dollars on other sectors of the economy.

The Ambassador of the United States, HE David Reimer, commended the MCCI for driving this initiative in the domain of satellite-data and stressed that the United States, through its Business Facilitation Incentive Fund, is helping Mauritius to gain the expertise of a US expert to develop new sectors of the economy.

The Minister of Innovation, Technology and Communications, Hon. Yogida Sawmynaden, in his opening speech, explained that as Mauritius prepares itself to launch its first KubeSat next year, the expertise of an US expert on satellite-data was fitting. Such initiatives will enable Mauritian entrepreneurs and scientists to have a better understanding of satellite-imagery as the country starts its pioneering phase in this domain. He further expressed the need towards more collaboration between the private and public sector for the development of satellite-based applications in the country.

During his assignment in Mauritius, Mr. Alex Fortescue from Digital Globe held working sessions with business operators as well as a joint working group between the MCCI, the US Embassy and the public authorities on the way forward for the industry.

The expert along with MCCI representatives further held courtesy calls to the Minister of ICT, Hon. Y. Sawmynaden, the Minister of Ocean Economy, Hon. P. Koonjoo, and the Minister of Transport and Public Infrastructure, Hon. N. Bodha during his visit to Mauritius.

The MCCI is currently working alongside the expert to prepare a strategy for Mauritius in terms of Satellite-based data for the economic development of the country.

From left to right: Mr. Barlen Pillay, Acting Secretary General of the MCCI, HE David Reimer, Ambassador of the United States to Mauritius, Hon. Yogida Sawmynaden, Minister of Innovation, Technology and Communications, Mr. Marday Venkatasamy, President of the MCCI, and Mr. Alex Fortescue from Digital Globe.