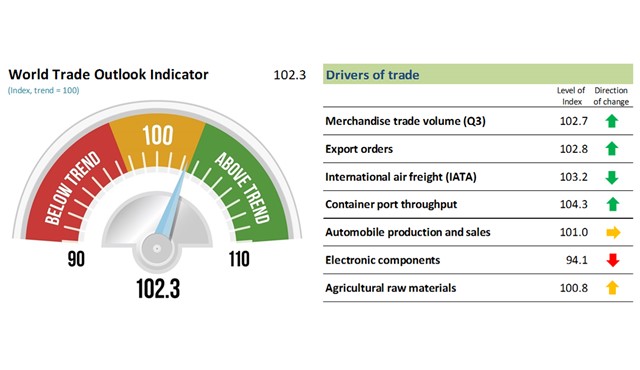 WTOI: Trade growth to sustain momentum in first quarter of 2018

The WTO’s latest World Trade Outlook Indicator (WTOI), released on 12 February, suggests that the trade recovery of 2017 should continue, with solid trade volume growth in the first quarter of 2018. The WTOI’s current value of 102.3 is little changed from the 102.2 recorded last November, indicating steady merchandise trade volume growth. Strong results for air freight, container shipping and export orders in particular suggest that, while the trade recovery may moderate in due course, it will likely continue in the coming months and remain above trend.

Component indices of the WTOI are mostly favourable. Container port throughput (104.3) and air freight (103.2) are firmly above trend, indicating strong current shipments of goods. Meanwhile, export orders (102.8) have reached their highest level since 2011, pointing to sustained recovery. Weaker results are observed for automotive products (101.0), agricultural raw materials (100.8) and electronic components (94.1), which could indicate a weakening of consumer sentiment.

Overall, these results are somewhat stronger than the WTO's most recent trade forecast issued on 21 September 2017, which forecast merchandise trade volume growth of 3.6% for 2017 and 3.2% in 2018.

Designed to provide "real time" information on the trajectory of world trade relative to recent trends, the WTOI is not intended as a short-term forecast, although it does provide an indication of trade growth in the near future. Its main contribution is to identify turning points and gauge momentum in global trade growth. As such, it complements trade statistics and forecasts from the WTO and other organizations.

Readings of 100 indicate growth in line with medium-term trends; readings greater than 100 suggest above trend growth, while those below 100 indicate the reverse. The direction of change reflects momentum compared with the previous month. The WTOI has recorded readings of 102 or higher since February 2017, which coincided with a strengthening of global trade flows.

The next WTO trade forecast update is anticipated in early April.