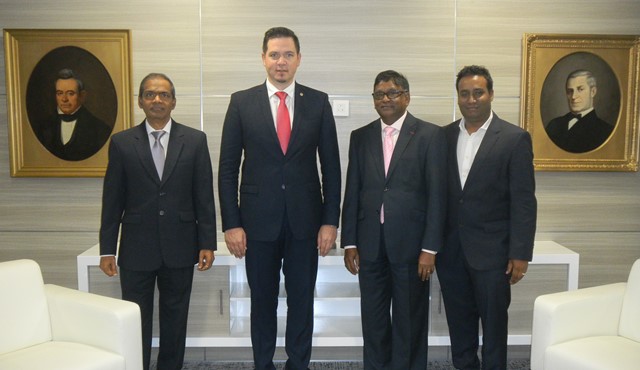 Courtesy visit of H.E. Mr. Tudor Ulianovschi at the MCCI

During his visit, a meeting was held with the President and Secretary General of the MCCI, Mr. Marday Venkatasamy and Mr. Barlen Pillay, respectively. Ms. Faeeza Ibrahimsah, Manager of the Communications and Promotion Division, also attended the meeting.

H.E. Mr. Tudor Ulianovschi stated that Moldova is venturing into Africa and expressed his interest in the African Strategy of Mauritius. Discussions also focused on the different avenues of cooperation that can be exploited between the two countries, mainly in the ICT/BPO sector.

Mr. Venkatasamy, as President of the COMESA Business Council, informed them of the holding of the COMESA Trade Fair, in April in Kenya, during which they can come across different business opportunities in Africa. He also expressed the wish that meetings between business operators be held both in Mauritius and Moldova to explore the several opportunities of trade and investment that exist between both countries.