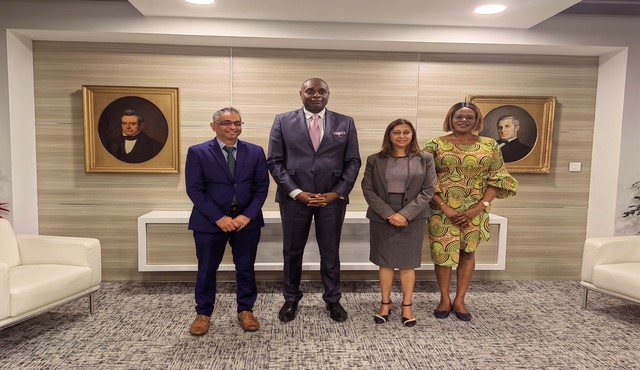 (from left to right): Dr Yousouf Ismaël, Secretary-General of the MCCI; His Excellency Mr. Constant-Serge Bounda, Ambassador of the Republic of Congo to Mauritius; Mrs Namita Jagarnath Hardowar, President of the MCCI and Mrs Maryse Carmelle Bounda

HE Constant-Serge BOUNDA, Ambassador of the Republic of Congo to Mauritius, with residence in Maputo, Mozambique, paid a courtesy call on the President and Secretary-General of the MCCI, Mrs. Namita Jagarnath Hardowar and Dr Yousouf Ismaël respectively, on 15 November 2022.

The objective of the visit was to discuss avenues of collaboration between both countries, particularly with regards to business and trade relations.

During the course of discussions, it was felt that business relations could be further consolidated through more exchanges and interaction between the business communities of both countries.

It was proposed that an agreement of cooperation   be signed between the MCCI and the Chamber of Commerce and industry of the Republic of Congo. Both parties were also of the view that networking events and business forums could be organized to further enhance trade between the two countries.

Over 2016-2021, exports to and imports from the Republic of Congo averaged MUR 14 million and MUR 34 million, respectively.

Imports from Congo was at its highest in 2016, amounting to MUR 107 million. These consisted mainly diamonds (MUR 80 million) and wood sawn or chipped (MUR 22 million).In 2021, Mauritius exported goods worth MUR 11 million to Congo. These consisted mainly “articles for the conveyance or packing of goods, of plastics; stoppers, lids, caps and other closures, of plastics” worth MUR 8.4 million.

Export Potential: According to the International Trade Centre (ITC), the products with greatest export potential from Mauritius to Congo are whole and frozen fish, sugar cane, and men's trousers & shorts of cotton.

Mauritius has the highest supply capacity in prepared or preserved tunas. Medicaments consisting of mixed or unmixed products, for retail sale is the product that faces the strongest demand potential in Congo.