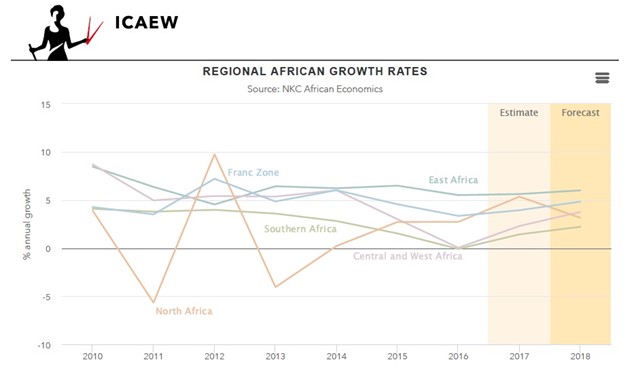 ICAEW Economic Insight Q1: The outlook for Africa in 2018

The ICAEW Economic Insight Africa Q1: a quarterly economic forecast for the region for the first quarter of 2018, was released in March 2018. In Africa, the slowly rising commodity prices in the first quarter of 2018 is expected to help the region but oil-dependent economies continue to lag. It is expected that diversified economies, especially those in East Africa, will show the strongest growth this year and that the political change in South Africa and Zimbabwe will improve consumer, business and investor confidence.

In North Africa, real GDP growth is forecast at 3.2% for this year, driven mainly by stronger growth in Egypt. Egypt’s economy is forecast to expand by 4.5% in 2018, with growth largely driven by strong exports and investment. In Morocco, which is highly dependent on the agricultural sector, a smaller harvest will see growth easing to 3.2% this year from 4.1% in 2017. The outlook for Tunisia (2.1%) is broadly unchanged from last year.

The outlook for the Franc Zone is similarly positive: GDP growth is forecast at 4.8% for this year, from 4.0% in 2017. Growth in Cameroon (4.2%) will be supported by a rise in natural gas production, while the agro-industrial sector will keep Ivory Coast on a strong economic growth path of 7% this year. Gabon is projected to grow at a faster pace of 2.2% this year, thanks to higher oil prices.

Central and West Africa’s growth for this year is projected at 3.8%, from 2.3% in 2017. The powerhouse in the region, Nigeria, is forecast to expand at a healthier 2.6% this year, from a mere 0.9% last year, as oil prices recover and forex liquidity improves. The Democratic Republic of Congo is also expected to grow at a faster pace (3.5%) on the back of higher international copper and cobalt prices.

East Africa is forecast to record robust growth of 6.0% this year, again making it the fastest-growing region on the continent. In Kenya, where political uncertainty is steadily declining, GDP is projected to increase by 5.7%. Tanzania and Ethiopia are expected to remain two of the continent’s fastest growing economies this year, with growth reaching 6.9% and 7.5% respectively. In Uganda, a marked recovery in the agricultural sector pushed growth from a dismal 2.5% in 2016 to an estimated 6.3% last year, and growth is projected to remain strong at 6.0% in 2018.

Growth in Southern Africa is forecast to improve to 2.2% in 2018, as the two main engines in the region, namely South Africa and Angola, record better growth this year, albeit still below potential. Zambia’s (4.6%) economic growth is also set to improve due to higher copper prices, while the Namibian economy (3.0%) is expected to rebound this year as production from new gold and uranium mines and offshore diamond operations ramps up, in addition to increases in manufacturing and retail activity. The uptick in global demand will bode well for Botswana’s diamond exports – with GDP growth forecast at 4.3% for 2018 – while growth in Mozambique (4.8%) is projected to increase as investment in the liquefied natural gas sector begins.