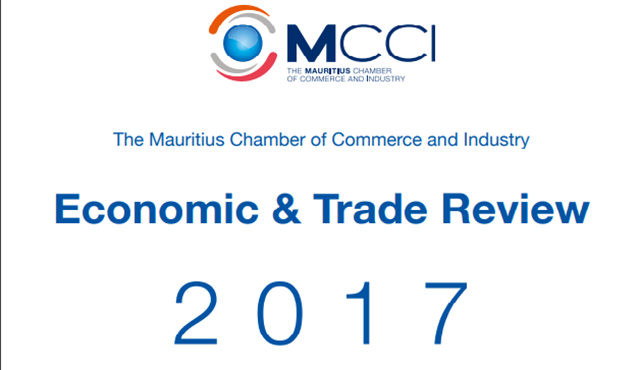 The MCCI Economic & Trade Review 2017 was released on Thursday 29th March 2018. The publication makes an overview of the main macro-economic and trade statistics for the year 2017, as well as an outlook for the upcoming year 2018.

At the international level, policy transitions and stronger business and consumer confidence are supporting the recovery in the global economy, with global growth projected to rise to 3.7 percent, according to latest IMF estimates. With some 120 economies, accounting for over three quarters of world GDP showing a pickup in growth, global economic output in 2017 has been higher than expected.

Locally, after a moderate growth cycle between 2009 and 2015, the Mauritian economy showed signs of renewed dynamism, with economic growth rate at market price in 2017 expected to be around 3.9 percent according to latest figures from Statistics Mauritius, higher than the 3.8 percent achieved in 2016.

Economic activity in the country continues to be driven by internal demand. Consumption expenditure grew by 3.1 percent, whilst investment grew by 5 percent, the second consecutive year of positive growth after 5 years of contraction.

On the external front, faced with uncertainties, low exchange rates and the introduction of new international norms, our exports of goods and services increased by a modest 0.1 percent, after two years of contraction. It is noticed that total trade (Exports + Imports)  has increased from Rs 185 billion in 2007 to reach Rs 252 billion in 2017 representing an increase of 36%.

With the pickup in commodity prices, most especially petroleum products, and an increase in domestic demand, inflation started to bounce back, reaching 3.7 percent in 2017.

Looking ahead, the IMF predicts global economic activity to pick up pace in 2018 and 2019, with the expected impact of the recently approved U.S. tax policy changes. Nonetheless, inward-looking policies in some main advanced economies, and continued political uncertainties in other economies pose downside risks.

Amidst a rebound in the world economy, growth in Mauritius is expected to pick-up slightly with the latest figures from Statistics Mauritius and IMF forecasts for Mauritius both pointing towards a 4.0 percent growth rate in 2018.

Nevertheless, both internal and external risks remain as the country is faced with the combination of negative externalities with the effect of climate change and weather disruptions, delays in the implementation of public infrastructure projects as well as persistent uncertainties in the global economy and rising commodity prices. Mauritius needs to makes full use of its monetary, fiscal and structural policy levers to sustain its economic development agenda.