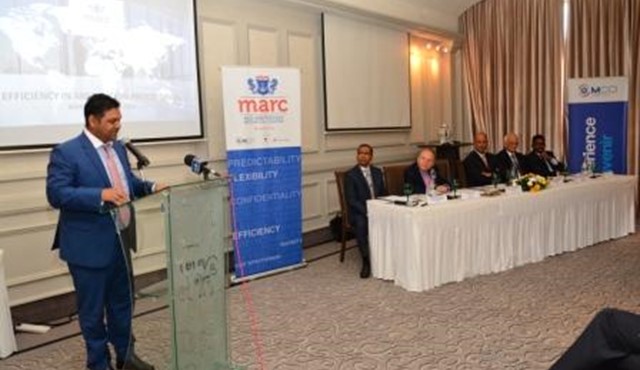 The MCCI Arbitration and Mediation Center (MARC),  ADR arm of the Mauritius Chamber of Commerce and Industry), officially announced the composition of its new MARC Court during the opening of a high-level international conference on arbitration on the theme of 'Efficiency in Arbitration Proceedings', held on 12 July 2017, in Port Louis.

During his welcome address at the Conference, the President of MCCI, Mr. Azim Currimjee, announced the new governance structure of MARC, which shall be composed of a MARC Court and a MARC Advisory Board. He also announced the names of the members of the MARC Court, which shall be presided by Neil Kaplan, a major figure of the world of international arbitration.

By setting up the MARC Court, MARC brings itself in line with international best practices in arbitration, in order to better serve the business community.

The President of the MCCI emphasized the importance of opting for institutional arbitration instead of ad hoc arbitration, outlining that a world of difference exists between the two systems, with the former involving more efficiency, accountability, transparency and ease of enforcement.

He also highlighted the important role of an arbitration institution such as MARC: 'Arbitration is private justice, and as an arbitration institution, our responsibility is a significant one: to ensure that the right parameters are in place for arbitrations to take place as efficiently and as ethically as possible.'  The Attorney-General of Mauritius, Hon. Ravi Raj Yerrigadoo, guest speaker during the opening of the Conference, congratulated MCCI and MARC on this initiative: 'We would like to seize the present opportunity to congratulate MARC for contributing to place our country as an attractive venue for Arbitration in the region. The adoption of a new governance structure for MARC with leading eminent experts in the field of international arbitration headed by Mr. Neil Kaplan will surely comfort MARC position as a prime Arbitration Centre delivering services of high international standards, ' he said, reiterating his assurances that Government will give its full support to the promotion of arbitration in Mauritius.

To view the names of Members of the MARC Court, please click here.

Legend of the photo: The Attorney General, Hon. Ravi Raj Yerrigadoo during the official launch of the MARC Conference 2017'