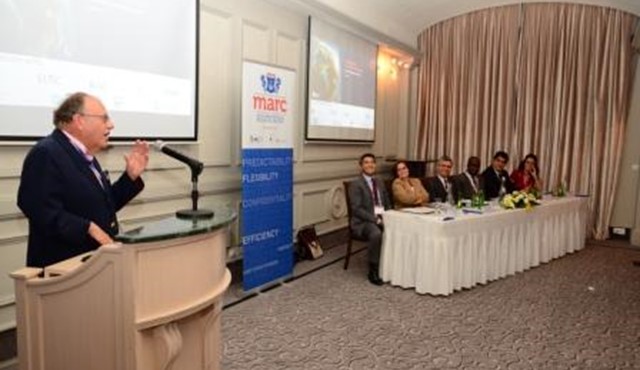 MARC Conference on 'Arbitration: It's Time for Africa - A View from the Arbitral Institutions'

A MARC Conference on the theme 'Arbitration: It's Time for Africa - A View from the Arbitral Institutions', was held on 11 May 2016. The event saw an unprecedented participation from major arbitral institutions from across the world, who gathered together to discuss about the present and future of arbitration in Africa during two main panel discussions themed around the questions of how arbitral institutions can contribute towards enforcement of arbitral awards, and how they can assist in promoting African ADR practitioners. Some of the main speakers included Mrs. Meg Kinnear, Secretary-General of the ICSID (International Centre for Settlement of Investment Disputes), Mr. Richard Naimark, Senior Executive Director of the ICDR ( International Centre for Dispute Resolution) and Ms. Lim Seok Hui, Chief Executive Officer of SIAC (Singapore International Mediation Center). The two panel discussions were moderated by Dr. Jalal El Ahdab and Mr Barlen Pillay.

The President of the MCCI, Mr Azim Currimjee, in the opening speech, highlighted the efforts made by the MCCI during the past years towards developing best practices in the field of business, whether through provision of information, through advocacy, through promotion of training and development or through the promotion of ADR methods for settling dispute, through the MARC. He highlighted that the MCCI has always played this role with the sole aim of facilitating business and investment, and creating a secure environment in which traders can operate, in line with international standards and best practices.

The event was also marked by the presence of world famous arbitration expert, Mr. Neil Kaplan. Mr Kaplan commented in his closing remark that 'fair competition between arbitration centers is perfectly acceptable and I think an arbitration centre has to promote itself for its own benefits, for its own assets and for what it can do to the parties but at the end of the day in all the cases there is a question of consumer choice and that is what we are all here for.  We are all giving the consumers a choice of running to get there with disputes resolved expeditiously and fairly, and somebody said, and I have to agree with them, that the more trade there is in the world, the more disputes there will be (...)there is probably enough business for everybody and we have to spread it around.'

The event which was organized and hosted by the MARC Permanent Secretariat and was sponsored by the Chambers of A.R.M.A. Peeroo SC GOSK and 5 St James Court, was attended by over 100 participants from Mauritius and abroad, mainly lawyers, judges, arbitrators and other ADR specialists.

A special edition of the MARC Newsletter will be published and launched in the coming months to present main discussions and findings of the Conference.