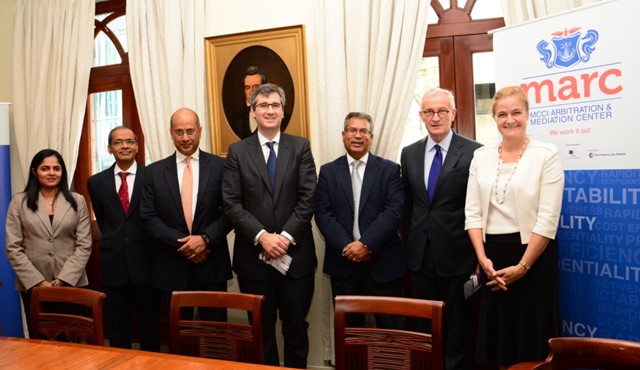 The MCCI Arbitration and Mediation Center (MARC) has entered into a 'Cooperation Agreement' with the Australian Center for International Commercial Arbitration (ACICA).

The Agreement was officially signed on Tuesday 10 May by Mr. Raju Jaddoo, Secretary-General of the MCCI and Mr. Alex Baykitch, President of ACICA, in the presence of Mr. Azim Currimjee, President of the MCCI,   H.E. Ms. Susan Coles, Ambassador for Australia in Mauritius and Seychelles, and Hon. Chief Justice James Allsop.  A delegation of Australian lawyers and ADR specialists also attended the event, which was hosted by the MARC Permanent Secretariat.

Hon. Chief Justice James Allsop, who heads the Federal Court of Australia, highlighted in his address the important role of Alternative Dispute Resolution as the cornerstone of the future of a peaceful commercial system. He said that as much as disputes are part of commercial relationships, and as much as good faith and a reasonable approach are embedded in commerce, so a civilized approach to dispute resolution such as that offered by arbitration and other ADR methods should also be embedded in commerce. He also commented that Mauritius is uniquely placed and is one of the jewels of Africa, and has a lot of potential as far as promotion and development of arbitration is concerned. The holding of the 23rd ICCA Congress in Mauritius was an important step in this direction, he said.

The Cooperation Agreement signed between MARC and ACICA is expected to foster the advancement of arbitration through exchange of information and publications, assistance and cooperation in the appointment of arbitrators, and facilitation regarding mutual use of support services.

The ACICA, which will be at the heart of the 24th ICCA Congress to be held in Sydney in 2018, will also collaborate with MARC to facilitate the organization of lectures of mutual interest in the field of commercial arbitration.