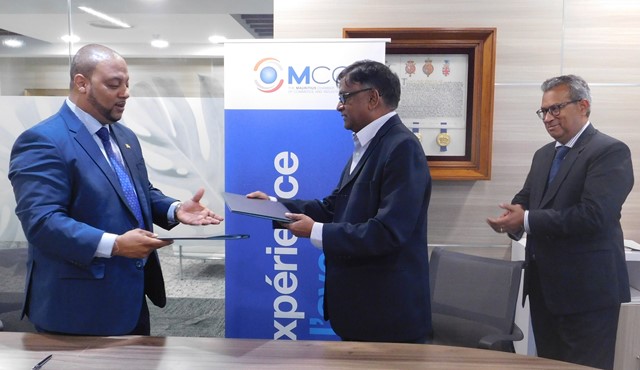 Mr. Oliver Bastienne was welcomed by the Vice-President of the MCCI, Mr. Marday Venkatasamy, who expressed his satisfaction pertaining to the positive development taking place in the collaboration between the two Island States, Mauritius and Seychelles. He further stated that he is confident that the outcomes of the 12th Joint Commission, held on 23rd October 2017, will pave the way to further consolidate the two countries’ cooperation.

At the private sectors’ level, both MCCI and SCCI have earmarked this visit by signing a Resolution to strengthen the existing collaboration between the two chambers. It is to be recalled that MCCI has signed a Memorandum of Understanding with the SCCI in 2004. The MoU was revamped in 2014. The MoU, which was again reviewed in 2016, also provides for the setting up of a Joint Business Council between the two organisations.

The Resolution signed today provides for further collaborative trade activities in the region, and an increase in the exchange of information on the economy, trade regulations, industrialization, economic legislations and business practices, between the two Chambers.

To foster a spirit of better cooperation and coordination between the business communities of both countries, the two parties also agreed through the Resolution, to identify key areas whereby the Mauritius Chamber of Commerce and Industry (MCCI) can provide capacity building support to the Seychelles Chamber of Commerce and Industry (SCCI) for the enhancement of trade and economic development in the Republic of Seychelles.

The Resolution also caters for the establishment and activation of the Mauritius-Seychelles Joint Business Council which will be used as a forum for the enhancement of business exchanges mainly related to trade in goods, trade in services and investment promotion between the two countries. The first Joint Business Council Meeting will be held in December 2017.