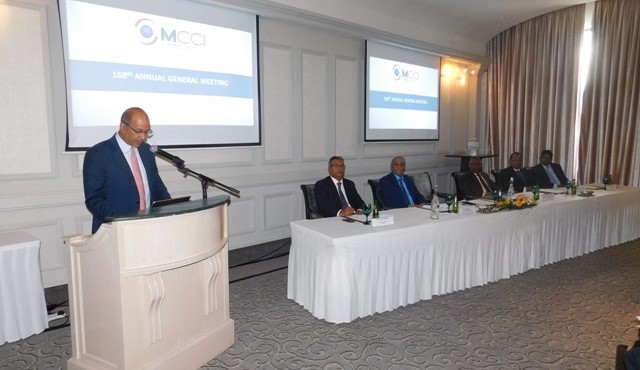 The President of the MCCI, Mr. Azim Currimjee,  emphasised on a shifting global economic landscape and a new world economic order in his State of the Economy address during the 168th MCCI AGM. He also stressed on the main challenges facing the Mauritian economy at Horizon 2050.

With a receding population as from 2030, the MCCI believes in the opening up of the economy to foreign knowledge, skills and expertise as well as retired individuals in Western countries. The President further made a case for domestic measures to boost fertility rates by harmonising the income tax policy  of penalising couples with more than child. He further advocated for the introduction of a negative income tax regime to address poverty, incentivise people to have more children and hence provide a boost to the economy.

The importance of education in combating poverty and ensuring growth was further stressed. To adapt ourselves to the challenges of 2050, he made a plea for an increase in the expenditure on education.

To accompany this transformation and to prepare for the challenges of tomorrow, the President spoke of the need to engage in a broad-based fiscal impulse and rationalisation process. He stressed that ten years after the tax reform of 2006, the business community is still faced by more than 40 taxes and levies and further pointed out a number of inconsistencies in the fiscal policy. Mr. Azim Currimjee spoke of the need for taxation to be simple and based on profits.

On the international front, the President advocated for proactively signing bilateral agreements with future superpowers whilst having some margin to negotiate with future trade partners - our scope for granting preferences is already limited given that more than 90 percent of our tariff lines are duty-free.

Furthermore, there is a need for a holistic strategy to revamp our production capacity. The President commended the launching of the National Export Strategy initiative and expressed his confidence that the implementation of the recommendations will start as from the Budget 2017/2018.  He made a case for improving the port productivity and  deepening the air connectivity.

The President further expressed the need for efficiency in the public sector. He commended the rationalisation process of institutions, as started by the setting up of Landscope Mauritius, and made a case for the setting-up of a single body whose aim and purpose is to support our national strategy to open Mauritius to the World in terms of the Promotions, Capacity Building & Exports, attracting inward investment and talents. He further proposed the implementation of a rapid, efficient and extensive Single Licensing Unit.

On Innovation, the President commended the Industrial Property Bill which makes provision for the signing  of the (PCT), the Madrid Protocol and the Hague Convention, as proposed by the MCCI. He nonetheless expressed the deep concern of the MCCI as to the provision of the draft Bill on a proposed move towards an international exhaustion of IP Rights regime. He re-iterated that allowing parallel imports while reinforcing IP rights is a contradiction and sends a wrong signal to operators and that no operator with a trademark, will be safe from a free-rider parallel importer who might leverage on existing marketing and brand equity, make use of foreign exchange volatility to flood and disrupt the market. He further raised the concerns of the business community on traceability, quality control, supply chains and after-sales technical and warranty services. He stressed that these sectors represent thousands of SMEs and employ more than 100,000 people and should not be put at stake.

The President of the MCCI expressed the need to incentivise innovation activities at all levels and advocated for the introduction of the Innovation Box Regime in Mauritius, similar to countries such as Ireland and Cyprus.

Mr. Azim Currimjee concluded with the Vision of the MCCI at Horizon 2050 as  a highly educated and dynamic population where each and everyone has a decent standard of living, a country with a buoyant industrial base as the engine of its economy, with innovative entrepreneurs engaged in high-value added production. The MCCI envisions an economy at the forefront of the digital revolution, with a fully developed and integrated life sciences industry, and tapping into the vast opportunities of its exclusive economic zones.