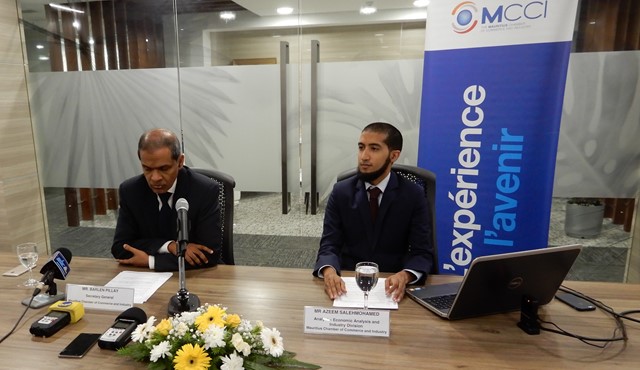 The Business Confidence Indicator remained in the positive territory at 11.2 balance points, but with weakened confidence in the outlook for 2019

The MCCI released its Business Confidence Indicator for the 4th quarter of 2018 on Thursday 21 February 2019, through a press conference.

According to the CesIFO institute, the global economic climate deteriorated in the fourth quarter of 2018, after reaching its peak at 26.0 balance points in the first quarter of the year. The indicator is now in the negative territory at -2.2 balance points, its lowest level since the middle of 2016.

Though growth in the world economy remains steady, it is losing its impetus with a number of downside risks to the global economic expansion. This analysis is in harmony with the latest forecasts by international institutions. The IMF confirms in its latest publication that the global economic activity continues to remain stable, but the expansion is now less vigorous and less balanced.

IMF favours a macro-economic scenario where the global growth rate, as measured by GDP, to increase by 3.7 percent in 2018. It has further reduced its global growth forecasts for 2019 to 3.5 percent and 3.6 percent in 2020, 0.2 and 0.1 percentage points below its last October’s projections.

Business confidence remains largely driven by the Commerce Sector, with exceptional growth in household expenditure levels, whilst the industry and services sectors show modest growth, on the back of uncertainties in the world economy, the implementation of new global governance initiatives as well as the impact of weather disruptions.

Indeed, while the commerce sector shows an exceptional growth of 13.4 percent, industrial firms are less confident at 4 percent. The increase related to infrastructure projects is offset by a manufacturing sub-sector which remains largely affected by the slowing economic dynamism of the country's main export markets, as well as the uncertainties and potential disruptions in the markets related to global trading environment. Traditional manufacturing activities are particularly confronted with fierce export competition, while local industries, although more resilient, are under greater pressure from imported products.

In the services sector, there is moderate growth in the confidence indicator at 3 percent. Businesses were affected by a multitude of factors in the fourth quarter of the year. The climatic disturbances that have affected the port operations, the movement of the yellow vests at Reunion (with a decrease of 7,600 tourists in the year 2018) as well as the changes and reforms in the financial sector have had an impact on the performance of the companies.

Demand remains one of the key engines of growth in the Mauritian economy, with more than 48 percent of entrepreneurs indicating that an increase in demand has been one of the most significant factors affecting their businesses. The combined effects of the implementation of purchasing power policies over the last two years [1], has led to an improvement in the purchasing power of individuals with household consumption expenditure growing by 3.4 percent in 2018 – its highest figure in over more than 10 years.

It is further noted that approximately 35 percent of entrepreneurs have indicated that their strategies for diversification of products and the tapping into new markets have contributed positively to their business performance during the fourth quarter of 2018 whilst 11 percent of enterprises believe that a favourable monetary and exchange rate policy has positively affected their business performance.

Nonetheless, some 18 percent of entrepreneurs have indicated a decrease in the demand for their products, mostly accompanied by higher levels of competition in the marketplace. Indeed, with a highly liberalised economy, and faced by global competitiveness both on the domestic and external markets, entrepreneurs, at 45 percent point to an increase in competition as one of the constraining factors affecting their businesses. Moreover, we notice that the cost of doing business is also amongst the main factors affecting business performances, with more than 28 percent of companies pointing to the latter as one of the negative factors affecting performance in enterprises.

More than 40 percent of companies point to an increase in global and local demand as the main reason for their employment policies, whilst some 26 percent of companies are in an expansion phase. On the downside, some 10 percent of enterprises are in a restructuring phase in order to maximise the use of their workforce and mitigate the cost of production. Nearly one in four companies are either experiencing recruitment difficulties or faced with labour market rigidities. The streamlining of procedures for employment as well as addressing the skills mismatch through targeted training and education is primordial for the development of the economy.

Based on the business climate results for the first three quarters of 2018, we estimate that the economic growth in the fourth quarter of 2018 was of 4.2 percent. Our econometric projection for the full year 2018 is that growth should be of approximately 3.9 percent, a slightly lower figure than initially forecasted. This is mainly due to the sharp reduction in sugar production and low sugar prices. Our Growth forecasts slightly differ from Statistics Mauritius, with our estimates of the textile sector deflator for 2018 being at a lower level, though we also estimate a contraction in textile manufacturing in the year 2018.

We are currently experiencing a rather prudent optimism of entrepreneurs regarding the economic environment, with a number of downside risks to the economy, be it at the global or local levels. In 2019, the economic perspectives for growth has worsened and is expected to be less balanced, with a number of uncertainties both globally, and locally.

An analysis on the awareness and use of main incentives & measures

Mauritius has, throughout the last decade adopted a number of incentives and schemes to boost the economy and incentivise entrepreneurship and innovation. Ten years after the Global Financial Crisis of 2008-2009, and with a plethora of incentives available to operators, the MCCI has conducted a preliminary analysis with our operators on the awareness and use of such measures. Throughout our analysis, we have identified six main categories of incentives available to enterprises – Exports-Related, Training and Employment, Gender Mainstreaming in the Workforce, R&D and Innovation Measures, Investment Measures, Sustainable Economy and Environment as well as SME and Entrepreneurship. These constitute some 28 incentives and schemes, And unsurprisingly, the main incentive used by enterprises is the Training Levy Refund of 70 percent for training of employees, with some 56 percent of enterprises surveyed making use of the measure.

Aside from new incentives and measures which have had insignificant impact on enterprises so far, the least utilised measures is the double deduction on R&D Expenditure which has only been utilised by some 2.5 percent of enterprises surveyed.

The full report can be accessed here.